Consumer Society: Who Really Buys It?

Recently I was having a conversation with a group of 13 year old youth from my neighbourhood on the effects that the media and marketing have on us. We wanted to learn how to use the media to share positive messages within our community, so we started by studying some typical examples. I was surprised at how conscious the girls were of the manufactured nature of the "beauty" being sold to them through luxury advertising in order to convince them to buy things. The importance of developing the habit of analysing and reflecting on the media's messages became clear. We concluded that in a world where it's too easy to become a passive recipient to these messages, this habit helps us make decisions about whether those values correspond with our own.
But of course being completely immune to a force that permeates our day to day lives is almost impossible. One of the youth, noticing the prevalence of female models in marketing campaigns, concluded that advertisements are geared towards men. "Women don't need to be convinced as it is natural for them to go shopping." 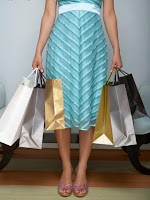 The comment certainly raises an interesting question in the world of rising consumerism, where both men and women increasingly dispose of their income for the acquisition of more material goods. Is this daily ritual really at the core of human nature? There are, evidently, powerful social forces at play that are shaping both our habits and our behaviour. Just how is the story of who we are being retold through the fictions of the media? And to what extent is our spiritual nature being worn away by a growing, pervasive materialism?

Last week, we posted a link to a document entitled Rethinking Prosperity: Forging Alternatives to a Culture of Consumerism, a statement of the Baha'i International Community (BIC). I really encourage you all to take a look at it if you haven't already. It discusses the challenges facing the realisation of a more sustainable development, citing consumer culture - a distortion of humanity's true nature and purpose - as one of several hindering factors to a lasting, shared prosperity.

Another interesting resource, Prosperity Without Growth, was written by Tim Jackson of the Sustainable Development Commission of the UK. As the title suggests, the document questions the sustainability of an economic model that has 'growth at all costs' at its centre, so that the pursuit of economic growth pushes forward at the expense of sustainability and well-being. Jackson asks us to consider what a new model for prosperity could look like.

Chapter 6 deals specifically with consumer culture. Jackson introduces the idea of a "language of goods." In this "language", material possessions say something important about who we are, turning objects of no value into objects of status and competition. And as the BIC document points out, this in turn "reduces human beings into competitive, insatiable consumers of goods and objects of manipulation by the market." Is marketing using this same language to create the 'shop-a-holic' image of women?
Jackson also explains how not only do we buy these possessions, but we also become attached to them. Citing examples like our CD collections or our favourite pieces of clothing, he describes how we come to think of these objects as part of the "extended self." If he's right, then it shows just how quickly our spiritual nature can become encroached by a material one. If these objects define in part who we are, then what room does that leave for our inner reality?

Both documents urge us to think about new models of prosperity and sustainable development - where the endless production and consumption of goods is no longer the purpose of life nor the cause for further social inequalities and environmental destruction. And where traits like competition, greed and apathy cease to be rewarded over behaviour that promotes unity, justice and sustainability. As it turns out, the link between the consumer urge and our current model of development (powered by a ruthless economic growth) is very strong. The system actually depends on this excessive consumption as both a driver of growth and a marker for progress as it at once reinforces and feeds off a human addiction to spending. In Jackson's words:

On the one hand, the profit motive stimulates newer, better or cheaper products and services through a continual process of innovation...at the same time, the market for these goods relies on an expanding consumer demand, driven by a complex social logic...taken together, these two self-reinforcing processes are exactly what is needed to drive growth forwards.

People of all ages aspire towards bigger, better, newer things, even when their current versions work just fine. Marketing is the science of creating 'needs' that never existed. And of selling dreams. And preci

sely because this material acquisition will always fail to provide the ideals that the language of marketing promises us, we keep wanting more. "Consumer culture perpetuates itself precisely because it succeeds so well at failure." It's no surprise that these dreams allure us. In a world of increasing injustice, economic crisis and unprecedented environmental distress, having something to hope for is important. In a secular world, consumer culture is nourished by the human need for hope.

Both the BIC document and Jackson make no secret of the scope of change required. Jackson writes:

It is also vital to recognise that this pathology is not simply the result of some terminal quality in the human psyche. We are not by nature helpless dupes, too lazy or weak to resist the power of manipulative advertisers...rather, what emerges from this analysis is that the 'empty self' is a product of powerful social forces and the specific institutions of modern society...we need to identify opportunities for change within society - changes in values, changes in lifestyles, changes in social structure - that will free us from the damaging social logic of consumerism.

And the BIC document:

The transformation required to shift towards sustainable consumption and production will entail no less than an organic change in the structure of society itself so as to reflect fully the interdependence of the entire social body - as well as the interconnectedness with the natural world that sustains it.

So it seems that change necessitates an entire restructuring of the way we conceive of both human nature and modern society, notwithstanding the institutions that join it together, and a reconceptualisation of the 'growth at all costs' paradigm within which we currently live. It also seems that the consumer society promotes a culture of lethargy. Rather than creating protagonists of change, it specialises in manufacturing passive, distracted beings, chasing after glittery ideals that forever elude them.

The BIC document asks us what happens when we think of individuals as having "a contribution to make to the construction of a more just and peaceful social order." What happens when we step out of our role as 'producer' or 'consumer' and rephrase both our reason for being and our reason for exchanging with others? When we see ourselves as being capable of making valuable contributions to our community and society at large? When bonds of love are built and nurtured with those who are working with us? Where has this definition of human relationships, of the human being gone? 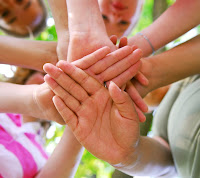 Do these values have to be at ends with a stable economic society? I don't think so. I think they can even be a motor towards the type of sustainable prosperity that both the BIC and Jackson - and I daresay most of us - hope for. 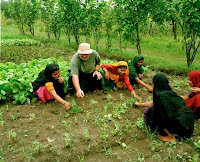 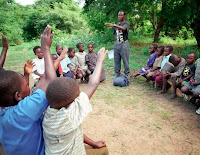 * * *
Clearly, the scale of change being called for is much greater than creating the right media campaign. However, those thirteen year old youth feel like it's a good place to start. And why not? The media is their voice to the world, it can be used to provoke thought, to rewrite what being human means and also to remind individuals that they do have a choice in all this. If the media tells us who we are, then we need to create images of the human nature we believe in.

So as part of their desire to learn about changing the neighbourhood, they have created posters that ask their neighbours to think about the characteristics of their ideal community. In a sense, they are reminding those neighbours that they too have a role to play in its realisation. This weekend we're going to stick those posters around the neighbourhood, in local shops and apartment buildings. Perhaps it won't change so much too quickly. But it's their opportunity to act, and to give voice to their approach to transformation.

So now there are some questions we'd like to throw out to you, our readers:

How would this conception of the human being change the language of the media: the messages we share and the people we portray?

Do you have any examples of work being carried out in your community that illustrates the nature to serve humanity, to serve as an actor for change?


Building blocks for the new model of a post-consumer world, we could call it.